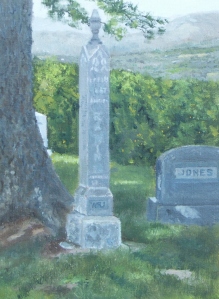 It was pretty peaceful painting in this cemetery.    At least until the car load of gang bangers decided to cruise through.

This is where you have to be to find some peace from incessant irritating ads.    I was relieved when Billy Mays was no longer shouting in that abrasive sandpaper voice.  I have to stand corrected after looking up his bio.  For some reason I always thought he was British.  I need my hearing aid batteries replaced.  I called him a loud mouth Brit to some Scot and she told me it was the Americans who had the loud mouths.  Ok, that is true in my case I suppose.  Anyway, Billy Mays dies and I’m  looking forward to fewer screaming ads for soap, etc.

Nope, I just heard his replacement.  A loudmouth Brit.  That started me thinking; does irritation sell?   I guess it may since these ads on TV must run into the hundred of thousands if not millions.   They wouldn’t pick obnoxious pitchmen if it didn’t increase sales.  There must be some research on the subject.  I speculate that irritation sticks with you longer than relaxation.  Later when you see the product, you remember the selling points, but the irritation has faded.

So then, would this work for romance?  If you  irritate a woman would you be more likely to stick in her mind?  I could be a good subject for a study of this effect.  I’ve irritated a LOT of people.  But maybe I overdid it so the irritation part sticks with them (probably to the  grave).  It could be that when they all hit senility I will be the only one they remember.  Too early to tell, but I don’t think  this is a viable dating tactic.

On another note of agitation –

On Mother’s Day, my wife had the gall to ask me if she had to cook dinner.   What the hell?  I told her by golly she did; it’s Mother’s DAY not Mother’s EVE, not Mother’s NIGHT.   That woman has me so irritated I will remember her ’til the cows come home.  And I need to ride the cow to work tomorrow since my car broke down.

This entry was posted in Painting, Plein Air, Rants. Bookmark the permalink.

30 Responses to Peace and Exasperation