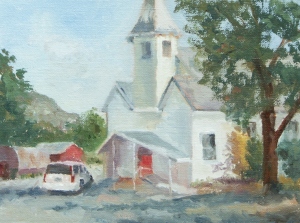 Ya right.   I’m quite certain the painter (David Jonas – now living in central California I think) I copied this from did do it in an hour or less on location.  I take 6 hours just to do a poor copy.   I’m running out of his paintings to copy.  I should email him to provide me more material.   So, I don’t know about you, but I use the word “loose” as a euphemism for can’t get it right.   Loose sounds more painterly and better than can’t paint for shit.

I should probably go into one of these places more often.  I’d kinda like to find one that gives change in the collection plate.   I put in a $20 and remove  5x$5.00 that way every one is a winner,  I think; I was never all that strong with the math.

Did you ever try fast draw with a real revolver?   I did.   Strapped it to my hip.  Took a few steps forward and like lightning drew.   I threw the revolver maybe twenty feet.   So, in fact, I may still hold the world record for furthest tossed revolver in a gunfight.

I did this in front of witnesses, naturally.  Wouldn’t have been nearly as embarrassing were I alone.  I couldn’t help but reflect had I been in a real gunfight, I would have been, as the cowboys say, screwed.   The vision became so real to me I found myself trying to talk my way out, “Now, hold on there – I’ve lost my weapon.  You wouldn’t shoot an unarmed man?”  “What?  Well, yes techically I did throw it away myself.  However, in the interest of sportsmanship I think you should allow me to fetch it.”   “Or, we could, end the whole deal, try a little team building exercise, where I give you my girlfriend, car keys,  house, wallet, but I keep this $2.00 for some lemonade to clear the trail dust out of my mouth.”

This entry was posted in Humor, Painting. Bookmark the permalink.

30 Responses to The One Hour Loose Plein Air Study